As Yogi might say, "I love March Madness, especially at this time of the year."  What makes this March exceptional for my colleagues and me is not only the thrill of watching college basketball, but the joy of reporting remarkable results from years of effort – results that represent findings by now two independent experts seeking to answer the question, “Does MedEncentive work?”
In my March 3rd blog article, I wrote about studies being conducted by researchers at the University of Kansas School of Medicine.  These researchers have discovered that employers in Kansas and Oklahoma realized significant and sustained cost savings and reduced hospitalizations after implementing the MedEncentive Program.  Now, a second independent source is reporting essentially the same results for a third MedEncentive installation. 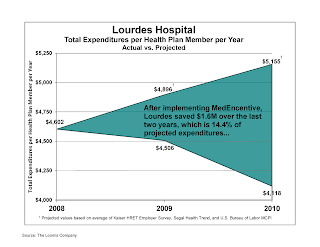 Gerry Blaum with The Loomis Company, a highly regarded health plan administrator lo-cated in Pennsylvania, reported that the Lourdes Health Network of Pasco, Washington recorded a significant decline in hospitalizations and total healthcare costs over a two year period after implementing MedEncentive in its employee health plan.
The graph above illustrates that this employer saw its healthcare expenditures decline over the last two years, realizing more than $1.6M in savings on 1,100 lives.  This represents a 14.4% savings against projected costs. 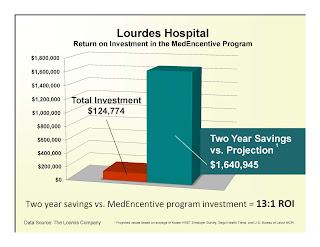 In terms of return on investment, Lourdes realized over $13 in savings for every dollar invested in the MedEncentive Program during this two year period.  This includes the financial rewards paid to participating doctors and patients.
To date, we have conducted a total of seven trials that have extended over several years.  All of them have contributed to answering the question, “Does MedEncentive work?”  Three of them have now been examined by independent experts.  Again, what Loomis found in the Lourdes data is very similar to what the researchers at the University of Kansas School of Medicine found in two other trial installations.
An obvious question is, “How do you know that the savings being reported in these trials can be attributed to MedEncentive?”  Putting aside how and why MedEncentive works for the moment, there are several ways that this question is being answered.
First, the sheer number of MedEncentive trials that realized cost containment goes well beyond coincidence.  Then there’s the length of time that our program has been tested.  Few if any cost containment solutions have been examined as long as MedEncentive, and there are none that we know of that have produced sustained results as long as our program.
I could go into greater detail in answering this question, but it is much more convincing to have independent experts report their findings and conclusions.  To this end, we have the analysts at Loomis to thank for the findings presented in this article.
Let’s begin by using Loomis' findings to examine the correlation between total annual healthcare expenditures per person and the level of participation in the MedEncentive Program.  Logically, if the cost savings in these trials can be attributable to MedEncentive, then we would expect costs to go down as participation in our program goes up, over time. 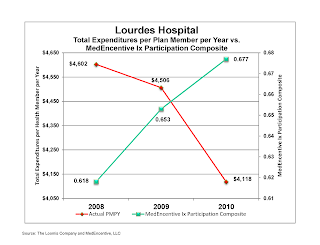 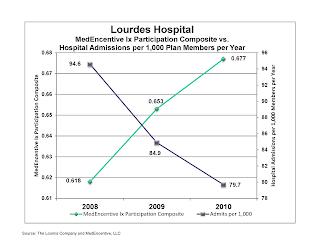 The last correlation I want to share with you may get a bit technical.  None-theless, it is an important finding in establishing the fact that Lourdes’ cost savings can be attributed to the MedEncentive Program.  So bear with me for a moment.
A common practice in healthcare cost analysis is to segment total medical expenditures into high cost claims, known as catastrophic cases, and all other expenditures, known as non-catastrophic costs.  The reason catastrophic cases are segregated is that they are generally unpredictable from year to year.  In other words, in a given population of people, we cannot effectively predict when an accident or a cancer will occur from one year to the next.  So in order to gauge the underlying health and financial risk of a population, analysts will examine the non-catastrophic cost trend.  Though the dollar amount of a catastrophic case will vary among analysts, a typical figure is $50,000 per person per year.
Without going into a great deal of explanation as to why patient participation in MedEncentive and non-catastrophic costs correlate, just know that this is a phenomenon we have observed time and again in our other trial installations.  And sure enough, this is exactly what was observed in the Lourdes installation.
The following graph compares trends in patient participation in our program and Lourdes’ non-catastrophic costs.  As the graph indicates, when patient participation goes up, non-catastrophic costs go down, and vice versa.  It is curious how the slopes of these trend lines are almost inversely identical. 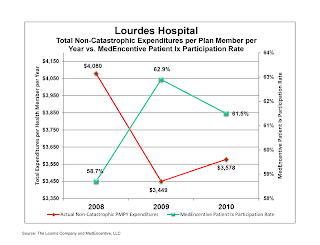 Certainly, we want patient participation to trend upward and remain as high as possible - at least above 55%.  MedEncentive has a host of tactics we employ to accomplish this objective such as adjusting the financial reward, increasing patient reminders, and enhancing the covered medical interventions.  It generally boils down to convincing the sponsoring organization to accept our recommendations.  I am pleased to report Lourdes is doing just that.
Obviously, these results speak for themselves in terms of answering the question, "Does MedEncentive work?"  In fact, Gerry Blaum has asked us to share his contact information if anyone is interested in learning more.

Gerald F. Blaum
Vice President
The Loomis Company
610-741-1133 Office Phone
610-741-4763 Cell Phone
I’m not sure what more I can say except that we challenge anyone to test MedEncentive according to design and disprove it works.  This has been a longstanding challenge.  In fact, we have collaborated for years with a host of others such as the University of Minnesota, University of Kansas, State of Oklahoma, and State of Indiana in an effort to secure funding from the federal government and private foundations to conduct control group studies.  Because we and our collaborators have failed to secure this type of funding, MedEncentive is offering to underwrite such a pilot, to include an independent, academic analysis of the results, in exchange for a portion of any savings.
In other words, we are willing to put our money where our mouth is.   In the spirit of March Madness, do we have any takers?
Posted by Jeff Greene at 2:08 PM 1 comment:


I am struck by the dichotomy of our belief systems.  Often, we want to hear it “straight from the horse’s mouth” before we believe.  However, if someone is trying to sell us something, we seek testimonials from “independent experts.”
For over six years, my colleagues and I have been pursuing a goal of fundamentally resolving the health and healthcare crisis in our country with MedEncentive’s unique web-based incentive system.  To this end, we have been reporting the findings from our real-world trials that clearly indicate that our system does, in fact, bend the cost curve.  It accomplishes this feat by improving both health and healthcare through a process that triangulates the interests of the patient, physician and payer.
Knowing that people would be skeptical when we pronounced the efficacy of our solution, we have been actively seeking confirmation of our findings by independent, academic analysis.  I am pleased to report that this objective has been accomplished.
Researchers from the University of Kansas School of Medicine (KUSM) took on the charge of independently analyzing our solution about two years ago.  Recently, they traveled to our offices in Oklahoma City to present their latest findings from two of MedEncentive’s trial installations.  KUSM conducted this research with funding from the State of Kansas, private foundations and other sources.  MedEncentive has not provided any moneys for this research.
One KUSM study is entitled: “Does MedEncentive Work?”  To answer this question, the researchers examined claims data for a self-insured employer in Kansas before and after implementing MedEncentive.  They found that physician office visits increased 13%, while hospitalizations declined 55%, over a period of two and a half years.  This is obviously an extraordinary result.  It is also noteworthy that the KUSM’s findings are consistent what we found in our other trial installations.
I encourage you to take a moment to click on this link (KUSM – Does MedEncentive work?) to view KUSM’s research poster and study abstract.  It is very well done, lists an impressive group of researchers, and tells a great story.  We understand the poster created quite a stir when it was presented at a recent healthcare conference in Seattle.
In a separate study, Dr. Doug Bradham, a behavioral economist, and his KUSM research team determined that our longest running trial installation (located in Oklahoma) saved between $3.10 to $17.70 for each dollar invested in our program over a period of four years.  Dr. Bradham presented the attached slides (KUSM ROI slides) at the annual Care Continuum Alliance Conference, in Washington, DC.  He and his colleagues have stated that achieving this level of cost containment for this length of time is remarkable.
The findings from both of these studies are now public.  The KUSM researchers plan to submit a series of articles to peer-reviewed journals that will expound upon their findings.  This link (KUSM Ix abstract) is to the abstract of KUSM’s  first published article dealing with the benefits of information therapy in our program.  It appears in the latest issue of the Journal of Primary Care & Community Health.
Obviously, we would like to see more of this research published (and discovered by decision-makers) as soon as possible, especially the definitive financial analyses.  However, it takes time to compose these articles and to have them accepted by peer-reviewed journals.  KUSM is actively seeking additional funding to complete and expand upon their research.
We are more confident in our solution than ever.  In fact, we believe we have only scratched the surface.  By this I mean we have demonstrated that MedEncentive bends the cost curve and produces a significant return-on-investment (ROI) using only evidence-based treatment guidelines and information therapy delivered in the office setting.  Though these are powerful tools, we have yet to apply our system to other medical interventions such as health risk assessments, medication adherence, smoking cessation, hospitalizations, etc., which we believe will further increase savings and the ROI.
Our confidence in our solution is such that we will soon be announcing a challenge in the form of a “request for proposal” in which we plan to fund a one year trial involving 25,000 to 30,000 people.  So stay tuned.
Now that you have heard (and seen) it “straight from the horse’s mouth” that “independent experts” have determined MedEncentive does, in fact, work, I welcome your comments and suggestions on how we can spread this good and important news.
Thank you...
Posted by Jeff Greene at 6:22 PM 4 comments: